Finally the weather was settled on a day where I had the afternoon off. Time for some weeding. I had hoped there wouldn’t be many weeds under the “weed suppressant” membrane but it was clear some new growth was coming alive.


Utilising the family I had my wife unpin the membrane, whilst our three year old son helped part the weeds from the dug up ground, and the twin girls who are nearly two, pushing the wheelbarrow together; they soon lost interest so the team quickly went 5 to 3 but we'll let them off this time.


The soil to my surprise was very light and fluffy as I dug it up. This vegetable patch was well looked after. The weeds were coming apart really easily and I thought this is going to be a breeze. I then discovered the Dock leaf weed (at least I think that’s what it is). As you can see, I tried to get most of it out but felt a snap when it came out so alas it’s still down there, but please give me some credit as these beasts show how far down I had to dig. I don’t know; maybe this is the normal depth of a weed but it felt like I had won a fight with Tyson after pulling these out. Here Alexander is holding the 3 longest. Many more went straight in to the bin (don’t want to risk them on the compost until I’m more confident). 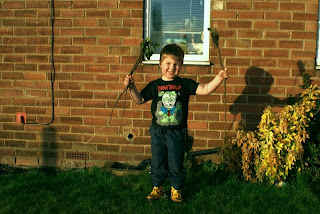 I also took on the challenge of building some support for my Broad beans. Hopefully this will withstand the need for six plants. I’ll have to do some more research to be sure though. I’ll get round to building another one at the weekend if it proves to be sufficient. 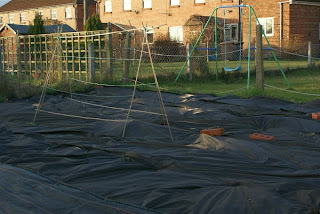 Speaking of those Broad beans, it’s now 16 days since I planted them and their roots were starting to poke through the drainage holes so I’ve repotted them in deeper compost, this time using John Innes Multi-Purpose Compost. When taking them out of there old homes, I can’t help but think how alien looking they are when their roots dangle down beneath them. Not two plants were the same and a couple had this enormous thick single root over 10cm long! Amazing. Anyway they now have double the depth of soil and I’m close to needing some more compost. Next Month is going to get hectic. 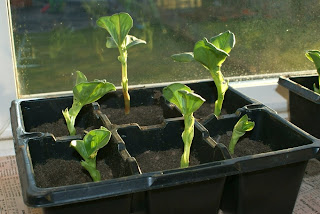 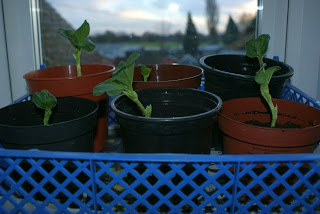 As you can see, I've now taken up both sides of the windowsill without increasing the number of plants. This has not gone down well with my wife. Happy Valentines Day Love x 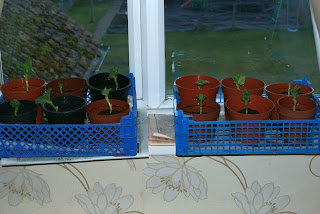 Posted by Daniel Harriss at 5:56 PM