A small taste of Spring

It felt like spring had arrived today! We spent the afternoon round my Wife’s Grandma’s for lunch so had a nice drive out in the sun. As mentioned in my last post I received the plant pots offered on Freecycle. A complete assortment of types and sizes now means I can cope with whatever requirement pops up. A big thank you goes to Lea for offering them to me. 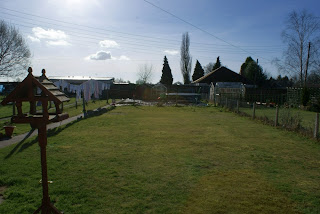 I've only just found out of a condition known as phototropism My Broad Beans are already showing signs of this condition where by they grow towards the sun rather than vertically. A quick fix should sort it out though by some Blue Peter wizardry making a reflective screen (cardboard and tinfoil) to go on the back side of the pots. I'll turn the plants round when I place it so to help them out. 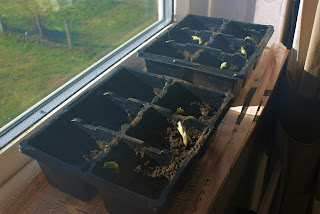 This Month’s edition of grow your own magazine has an offer for a growbag and some tubers. After drawing out my plan I realised I wouldn’t have enough room for potatoes. On the magazine’s forums a member suggested I could put them in where the leeks are pinned and just pull the potatoes out before the leeks go in on the proviso that the leeks would stay in a deep container first. This seemed a bit fiddly so left the potatoes out. With the growbag option though I can now add potatoes to my grow list and have them contained in the bag for themselves. The total cost for the growbag and tubers is just the P&P at £4.95 so couldn’t really turn it down. They should be here sometime in March.
I hope this nice weather lasts.
Posted by Daniel Harriss at 11:13 PM