The Urge to Sow

I've decided now is the time to start sowing the winter stuff. The Sprouts and Leeks won’t be ready until September and November so it can’t do no harm if I start them now rather than March. The way I'm seeing it is come March onwards, my list of jobs increase to such a level where by I don’t want to get overwhelmed. With that said I've sown the Leeks and Sprouts in trays rather than modules. Then in a few weeks’ time I can thin them out; if necessary, in to more trays rather than throw away the weaker ones just to make sure I get maximum yield. As our bedroom windowsill is full I've had to rearrange the kitchen somewhat to accommodate the new life. The Coffee machine now lives under the stairs and the toaster is next to the microwave. This hasn't gone down well. 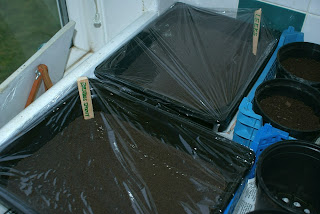 I've also planted another 12 Broadbeans as I didn't want them to go to waste. I've also erected some cardboard with silver foil on it to help stem the problem of phototropism by offering the plants strong light from more than one angle. Time will tell how effective it is. 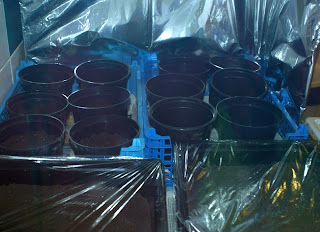 Alexander received some spring onion seeds from a family friend in the form of a grow-your-own pack. I let him sow them himself under supervision and he managed it perfectly. They now live on his bedroom windowsill. Windowsills are proving very handy at the mo. 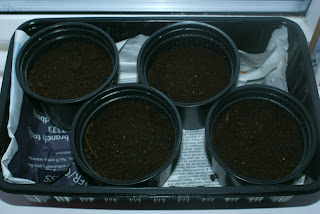 When digging up the weeds the other day, it quickly became apparent the girls and even Alexander couldn’t understand there were rows that couldn’t be trodden on. When everything is in and leaves are in abundance, it should be more obvious but until then I had to do something to stop them from walking over the beds.
Off to homebase I went and came back with 30 bamboo canes. I had an idea of using proper posts but saw how cheap the canes were so went for them instead. Using green string I now have barriers around the beds which help visualise the veg patch. They’re not perfect but do the job sufficiently. No picture yet but will do over the weekend.
You may remember I collected some plant pots from the freecycle network. The family that gave them to me also had some spare slabs. I wanted them for under foot in between the rows so went to collect as many as my car could take. It turned out 17 was the limit for my suspension and upon placing them down filling one walkway I’ve managed to work out I need another 32 to complete the patch. I’ll be returning on Sunday to collect the rest (Thanks Lea).

Finally Aldi's have their weekly specials on and this week's are a lot to do with growing your own. I've spotted some cheap tunnels perfect for my cabbages and lettuce's. They also have packets of seeds for 35p. Whilst my plan is full this year, I've made a note on my wall calendar that the offer started this week so next years seeds can be purchased in 12 months time at a fraction of the cost. Thanks for reading, more updates to come.
Posted by Daniel Harriss at 11:15 PM