That’s the countdown until British Summer Time starts and I cannot wait. It’s still too cold for my liking though but my hardier plants seem to be putting up a strong defence through it all. Two days ago I planted my first 12 Broadbean plants in to the ground. They have been warm and cosy since January 29th and now they are outside braving the elements after growing to 20cm in height. Their first two days in the open has seen them go up against a strong Westerly wind and thankfully they are still standing proud. I now only have space for a further 8 so from the remaining plants I shall pick the strongest. It’s going to feel weird to say no to the weaker ones but I guess that’s all part of the growing your own starting from seed. 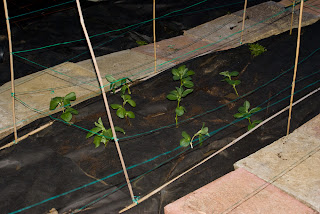 I also put in the first batch of onions that I sowed back on February 20th The picture below shows the depth at which I planted them. Their top growth wasn’t much whilst in the modules but their rootballs were nice and plentiful. I checked on them yesterday and after only 18 hours outside, their top growth went up by 1cm. Unreal. It’s as if they know where they are. 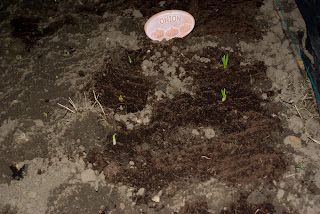 My Tomatoes finally germinated and are now growing strongly upstairs. From the 20 seeds sown, I have had 16 germinate. It’s apparently acceptable for some seeds not to germinate so not sure if this is down to that or my sowing technique. I have another packet to sow so will wait until the first week of April before doing them, and shall see how I fare. 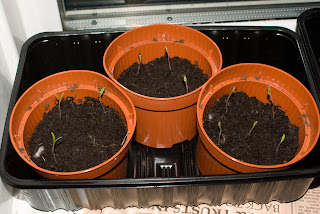 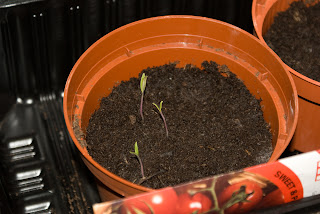 Finally the greenhouse is welcoming the extra space left by the Broadbeans and Onions but was quickly filled in with my Leeks and Son’s Spring Onions hardening off. I won’t get in to the veg patch until Sunday as it’s our Girls 2nd year Birthday party this weekend but I plan to prick out the tray of cabbages that our in the kitchen as they seem to be crowding for space now. One tip I learnt this week to stop the roots poking through the bottom of the pots is to line them with a used teabag, genius! 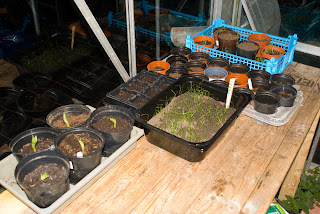 Thanks for reading :)
Posted by Daniel Harriss at 9:01 PM