That Sunday Update I Promised

Sorry its 7 days late. These lighter evenings have been catching me out good and proper. So those 5 days were very productive. I managed to plant out my Lettuces, Cabbages, and Brussels Sprouts. I also sowed directly into the Cabbage bed some Radishes as they are quick growing and will be out of the way by the time the Cabbages fill out. I then started new sowings of Parsnips and Runner beans. We also had our first Rhubarb Crumble of the year or rather my wife and kids did as I’m not a fan but bizarrely like Rhubarb & Custard sweets J 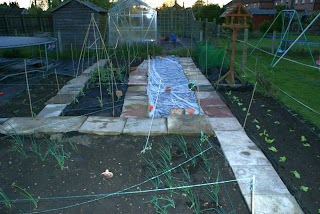 From the photo, which was taken in poor light, you can see the patch filling out. From the bottom you see the Onion and Leek bed. The Leeks won’t be going in just yet but in a few weeks they should be a nice size to plant out. On the right is the Lettuce bed. I have two rows of the all year round variety that took well from sowing in pots. I potted them on once from module trays before planting out and after 7 days in the ground which was when the photo was taken have started to grow more leaves. In the middle of the row I made a drill and directly sowed the Little Gem variety as none of the seeds I sowed in pots have germinated. Not really sure why.
Above the Lettuce bed is the Cabbage bed. The Cabbages were planted in firmly and I placed some collars around them that I brought from Amazon as they had a copper element imbedded in to them to double up protection from slugs. The collars main job though is to stop the Cabbage Root Fly. To add even more protection I purchased some wind break netting as it’s quite fine but a lot cheaper than other netting. This item is to protect the Cabbage from the white butterflies which try to lay their eggs on the leaves which then hatch in to hungry caterpillars. Time will tell how effective my DIY job will be as I have just draped it over bamboo canes and pegged it down in to the ground.
To the left of the Cabbage bed then is my Carrot bed. Under protection fleece, they should be protected from the Carrot Root Fly. The only problem I have is I can see mass growth under the sheet but because I wanted to secure the fleece down good, I had to lift up all the paving slabs and replace them down over the fleece so I may think about lifting the fleece off and getting the weeds out although some weed identification will need to occur first as I have no idea what a Carrot Seedling looks like.
Going left again and it’s the Legumes bed. At the back are 8ft bamboo canes in ridge build ready for the Runner Beans next month. In front of them are the Broad Beans which are all now flowering and in front of that is a wigwam for some sweet peas given to us. The rest of the sweet peas are against our south facing wall of the house.
Finally on the far left is the Brussels Sprouts and Parsnip bed. The Parsnips won’t go in yet until they have germinated in their toilet roll holder modules.
So there we are. I’m just over 2 months in to my vegetable growing and it’s starting to take shape. I’m already planning next year’s patch in my head but immediately reign those thoughts back in as I still have so much to do this year. I’ll try to stay on top of my blog updates as I have so much more going on in the greenhouse and our ever valuable windowsills. I only have 2 half days to work this month so I’ll be keeping myself busy.
Posted by Daniel Harriss at 11:55 PM