Enthusiasm Of A Sloth Right Now...

***WARNING*** I’ve just finished typing this post and reading back it really is negative and full of moaning so if you were hoping for a cheery update I apologise.

I really am a summer month gardener. Last year I put it down to it being my first year and that as I got better I would overcome the miserable weather we have and through gritted teeth plough on. Alas I have not changed at all and as our rubbish weather continues, I’m finding it increasingly hard to get out and get on. That’s not to say nothing is happening because it is. Harvests are lower than they were last year with only a handful of lettuce leaves and Radishes coming from the plot, but the veg that stays in the ground for months on end are looking much healthier. On the odd day it is sunny and warm, I get out and weed. With the amount of rain we have had, watering has not been an issue other than in the greenhouse, and the plot as a whole is active.

I’m really happy with my potatoes. With it being my first year of growing them and wanting the biggest harvest to come from them, the effort I spent making sure their bed was perfect for them is really starting to show. With the rotation now set, the beds should start to benefit from moving round each year.

The cages are working well but that could be more to do with our weather as to why there are hardly any cabbage white butterflies, greenfly, and blackfly around right now. 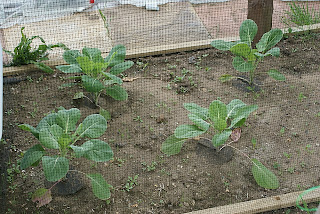 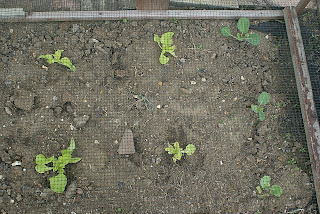 The carrots I sowed have hardly grown at all so I’ve resown some more and hope they do better. The Parsnips though are looking ok albeit with little growth but again, the weather…

The sweetcorn though is relishing this weather and is looking promising for the end of July.

The peas that decided to grow on are producing pods, but only handfuls. I must have sown 40+ seeds over the last couple of months to see little return. They really are struggling for me. The same could be said for the Broadbeans and the Dwarf French Beans, Especially the French beans. Wow they have struggled. I don’t think I’ll bother with them next year or the Broadbeans and just concentrate on a long row of peas.

The onions are bulging up nicely although I’m sure we were harvesting them this time last year. The leeks that slotted in between them are also filling out nicely. That’s 2 years now of growing Alliums without any trouble so I’m very happy with them.

The greenhouse is starting to fill out with the tomato plants but even these have found this year’s erratic weather very hard. I have a strong feeling we won’t be seeing the same number of fruits as last year but we shall see.

Peppers again are struggling and I doubt we’ll see much from them this year. Lots of leafy growth and buds forming, but after that, no fruit growth sadly.

So, what can I say? So far I’m nowhere near as happy as I was this time last year. It’s nothing to do with higher expectations as I would have been happy with the same as last year but to properly see the fruits of my labour affected so heavily by our climate really grates me. This is exactly the reason why I’m choosing to grow such a big variety of veg as I know not all can be affected badly so I get something at the end of it. So far that’s looking like Onions, Leeks, and Potatoes and hopefully the sprouts and Parsnips at Christmas. This then leads me to the question on whether I should just cut out some of the other veg and concentrate heavily on these half dozen or so? If our weather doesn’t pick up soon then I’m really going to get little return in 2012. BRING ME SOME SUN!!!!
Posted by Daniel Harriss at 4:15 PM